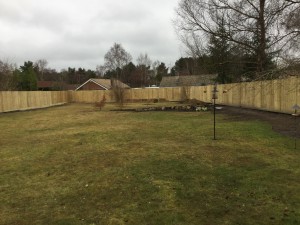 Every Picture has a frame

Work has started in earnest to create a garden framework.  If we revisit the brief, we already had some amazing borrowed landscape of trees from our neighbour’s gardens and from the distance.  Now we needed to start to create the first layer of the perspective. 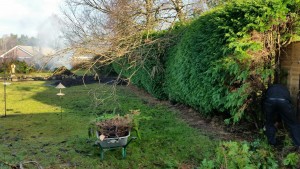 Also in the brief, we said we needed a low maintenance garden.  We had inherited a very large bulky thick Leylandi Hedge which would need tending on a regular basis.  It was also about 2 – 3 metres wide, taking up valuable planting space and also almost touching the house along the right-hand side.  The decision was made, it had to go. 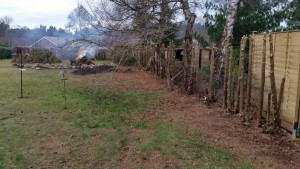 Clearing in order to rebuild

The team started by removing all the branches from the trunks.  As you can see from the photograph above and then to the right, the space it was taking up was immense.  The cherry tree trunk was right inside the hedge.  Already the garden was looking lighter and bigger.  You can see in the distance a bonfire.  It became clear after a few hours of clearing that this option wasn’t viable, the amount of greenery created from clearing the hedge was vast. 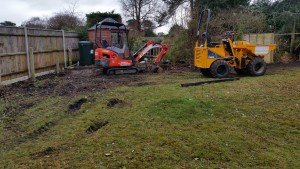 Next time to bring in the heavy equipment.  The digger and dumper were used to clear all the roots and a chipper was brought in to get rid of the trunks and branches.   So clearing this one side took approximately 2 days.  Then our neighbour agreed that the Rhododendron hedging on the other side should go too.  More chipping more digging and the garden was clear. 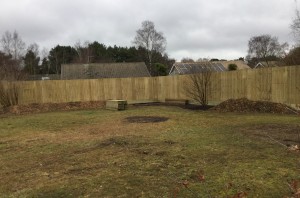 The team then started the task of erecting 150 linear metres of close board fencing.   Although there was already fencing along the bottom of the garden, we decided that the frame needed to be uniform all around the garden. 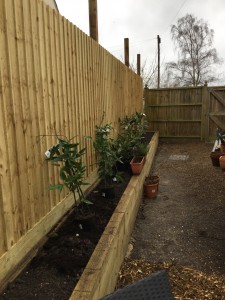 The one drawback was that now the hedge was gone the neighbours balcony was overlooking our garden.  So a Raised bed was built along the right hand side.  This will be planted with some quick growing clematis Armandii, which is evergreen and has fragrant flowers.

The team did a fabulous job, and the results were amazing – suddenly our garden looks bigger and lighter.

Next to start filling in the blank space in the middle, spring is nearly here and we need a vegetable garden soon.